It's no secret that I like to cook. I'm also pretty good at it, for a DIY home chef. My wife is even better and can not only cook, but bake her ass off.
All leads to great things. My kids are totally spoiled on their diets. They have no idea how many of their friends are living on chicken tenders and frozen pizza. Not that we don't eat those, because Lord knows we do, but they are not our primary meals.
It also hurts in a way. I'm not a cheapskate when it comes to going out to dinner, but since we can cook really anything we want, it makes me really ache to spend money on meals that are not a decent "value".
If you want just an egg, some bacon, and toast, you can cook it at home for like $1. If you're out and about, though, there's nothing wrong with going to Waffle House. Cheap, perfectly fine breakfast food, cooked by a real life person on a real life grill. Those fancy brunch places, on the other hand, would charge $12 for 2 eggs and 6 strawberries. Once again, perfectly fine food, plated prettier and a nicer atmosphere than the awful waffle, but I cannot stand to spend $12 on a couple eggs. That's a terrible value!
If I want a steak, I can buy prime aged steak at the shop for around $30 a pound. If I want just regular, unaged stuff, I can buy that for way cheaper at any grocery. I can grill a pretty damn fine steak with whatever rub I want on it, or no rub at all. Even at the highest end, I would spend less than $50 for us to eat an amazing damn steak dinner at home. That's a value. If I go to an actual NICE steak house (not some loud-ass Longhorn place with peanut buckets), you're easily looking at 4x that amount. Sure, they are very nice places to go, you might see come local celebrities, and the atmosphere is cool. But my God I cannot piss money away like that on a simple piece of beef. I could even take that $200, eat at a local Mexican joint with margaritas until I gain 10 lb and have to call an Uber home, and I would have $100 left in my pocket...and I would have an equivalently good time.
BBQ joints. I can make very good pulled pork, ribs, smoked chicken, etc., at home. I've gotten to be pretty damn good at it, enough that I would be willing to put it side-by-side with anyone. Doesn't mean I'd win, but it's at least comparable. But will I go to a barbecue joint? YES! Because it takes time and effort, and the stuff at Webb's or Eli's or whatever here in Cinci is comparable to mine, but I don't have to do the work! It's not an 8 minute broil like a t-bone.
Here's another. I've eaten to the Orchid at the Palms, a very nice fine dining place here in Cinci. Jenny and I had the 5-course meal, which the chef prepares the menu nightly for, so you don't really pick your food. Each course had a wine pairing and a sommelier described and poured it. Grand total: $300 for a 2 hour meal. AND IT WAS WORTH EVERY PENNY! I cannot make the stuff the chef made, nor can I have that level of service at my house. That IS A VALUE!
As you can see, I'm not cheap, but knowing how to cook keeps me from pissing my money away on places that provide me no value compared to what I can do at home. On a Saturday night, particularly if it's nice out, give me my grill, some meat and veg to cook on it, and a six pack. It's the best deal of them all.
at July 06, 2021 No comments:

Abbie, my youngest, was watching The Norris Nuts on YouTube a few months back. One of the kids on that show, I think "Sockie", likes to cook all the time. She made up a recipe she called "jaffles", and Abbie came upstairs to make it. I couldn't believe she was making this, as it's completely out of character for her to like this kind of concoction, but it turned out to be pretty darn good. It has become a real standard in my household, as Abbie or Jenny make it every time we run out, and we eat it primarily for breakfast.
The basic recipe is below. I cannot seem to find the right video, or I'd link to it, but you can find the Norris Nuts on YouTube if you can handle their insanity and cuteness.
"Jaffles"
1 bell pepper, diced
1/2 of an onion, diced
1 tsp coriander
1 tsp cumin
1 tsp paprika
1/4 cup sugar
2 cans cannellini beans
1 can crushed tomatoes
salt and pepper to taste
In a little oil, saute the pepper and onion until soft.  Add in the spices, stir for about 1 minute. Add the remaining ingredients and cook for about 10 minutes until everything is hot through.
Serve on toast or, even better, on some heavy crusty bread.
at May 17, 2021 No comments:

I don't think it's a secret, but I love cooking: grilling and barbecue, in particular. I could spend every evening sitting on my back patio with my Weber grill going and a beer in my hand.
There's another related thing I love: cooking shows. I think it started when I was a kid.  I remember watching Justin Wilson, the "I Gaarr-un-tee" guy, who cooked Creole stuff. Food Network engrained it even more with Alton Brown and Emeril. I even put flame stickers on my Kitchen-Aid mixer when I finally could afford one, and I was like 30 years old by then.
Nowadays, I can basically watch CreateTV all day every day. I put the link below. It's all the PBS how-to shows, including cooking shows, craft shows, and "This Old House" kind of stuff. The only time I really don't care for the station is when they have the yoga lady or the "Sit and Be Fit" lady on with their exercise classes, but it's great that they give people some way to work off the weight they gain cooking with Julia Child's recipes.
If you want to learn how to cook, I'd totally suggest looking for Julia Child, Jacques Pepin, or, my favorite, Steven Raichlen. Julia and Jacques should need no introduction, but they really do cook everyday stuff you can do at home, but the results are Lord Have Mercy Good.  Raichlen is a grillmaster/smoker guy who makes EVERYTHING on open fires.
There are SO MANY other great shows on there, but for the most basic recipes, those three are hard to beat.
Public Television's top shows in Cooking, Travel, Home Improvement, Gardening and Arts & Crafts | Create TV
at May 05, 2021 No comments:

Geeking Up Your Documents

For the life of me, I cannot grasp why anyone would choose to use "markdown" for their general documentation. I get it for specialty stuff, like math-y things, because you need something other than MS Word to format all the symbols.  Why, though, would anyone think it makes sense to use a markdown system for their regular old README files or release notes?

The only people who are going to read those things are doing so because they need information. I don't think they really care how fancy they look. You can do that with plain old text! And if you really insist on something a little fancier, with some boldface, italics, or bullets, just use freakin' WordPad.

Why geek it up? You have enough useless knowledge in your brain. Save your brain cells for more important stuff.

It has been years since email has been my primary office communication tool. With the availability of Skype, Yammer, Slack, and then Teams, I have been able to turn my Outlook into just a calendaring system.

How do you get out from under your email pile?

1. I had to COMMIT to an alternative. I chose the alternative and went with it exclusively. Nowadays, my go-to is Teams because it's available in my org and everyone has it here, but you can pick your own poison.

2. When people send me emails directly or as part of a thread, if possible, I send my responses in Teams and move the conversation.

3. Never....and I mean NEVER.....subscribe to alerting via email. Not for Amazon order delivery, not for updates from some vendor, not for any of the things you might monitor at work. Being an IT guy, when I see people's Inboxes and see 1000s of unread messages, almost inevitably they are things like alerts from the applications or systems they monitor. Exactly what is the point to the alerting if they go into a folder that never gets read? Just a waste.

4. Have an email address you can just use for subscriptions or on marketing things. I use a Gmail account. I can log into it when I need something like a link emailed to me, but by and large, it's just a dumping ground.

5. Remember that your email is probably stored forever by your company, even if you delete it from your Inbox and your Deleted Items folders. Do not worry that you'll delete something and cause problems down the road. Trust me on this: YOU WILL NOT LOSE ANYTHING. And you don't need to keep every reply or forward on a 10-email thread to 20 people anyway.

6. This is the most important: Process your email! If you don't need it, delete it! If it's something from a mailer you can unsubscribe from, unsubscribe. If you need to respond, do it right then and delete (or I suppose you can archive) the original. Whatever you do, get it OUT of your Inbox.

I have only the following folders, and this is from my actual Outlook email client. "Benefits" I use for correspondence around my benefits at work (insurance, 401k, etc.) That stuff is pretty important sometimes. "ODM" happens to be the project I'm on right now. "Training" is for things like links to certifications, renewal reminders, etc...only my own personal work training.  Finally, there's the Archive that I believe is built into Outlook, but if not, it's definitely on Office 365 online. That's where anything else goes, like my old project folders that I'm not working with anymore (though I will delete them after a couple months.) 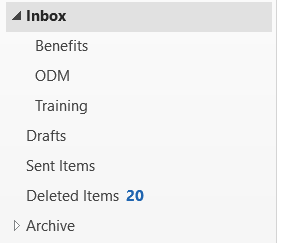 Hope this helps someone! Get crackin' and get out of email!
at April 06, 2021 No comments:

Hiking is fun. That's really all there is to say here. Caesars Creek, OH, is a great park to visit.
https://photos.app.goo.gl/qF1smwKgdNULUGvbA
at April 05, 2021 No comments:

Learning a little bit of Python through the EdX class "Python Basics for Data Science."  Why, you ask?
First impressions:
at March 24, 2021 No comments:

It's no secret that I like to cook. I'm also pretty good at it, for a DIY home chef. My wife is even better and can not only cook, b...