Learning a little bit of Python through the EdX class "Python Basics for Data Science."  Why, you ask?
First impressions:
at March 24, 2021 No comments:

Just posting this here because it solved my problems using WSL 2 and Cisco AnyConnect. Nothing more to add...just follow these instructions.

Such a Silly Little Thing

Scott Hanselman posted a little TikTok the other day that I saw via his Twitter (@shanselman). He encouraged people to make their mouse pointer bigger and turn it bright-ass green. I thought that was the silliest little thing, but I followed suit. I cannot believe I'm saying this, but it's making all the difference in the world.

In Win10, just search "Change  Pointer Size" and open the applet that comes up. You can adjust the cursor to whatever size you want, and you can change the color right there. I just bumped it up to a size 2 and made the color the first high-vis green/yellow option. With the higher resolutions we normally use today on such big screens, this little change makes it so much easier to track across all those pixels.

Is there anything in the world as comforting as your old favorite sweatshirt? I got this old thing at the Gap Factory Store around 15 years ago for like $4. I used to wear it every day for at least 6 months of the year, then I got "free" hoodie at CodeMash that replaced it. Put this baby on today and it was like I was sliding into my favorite slippers. Check out the elbows!

My youngest has adopted this as "her jacket" and wears it to school just about every day now. I'm claiming it only for the day, as they are home, and she'll take it back tomorrow. 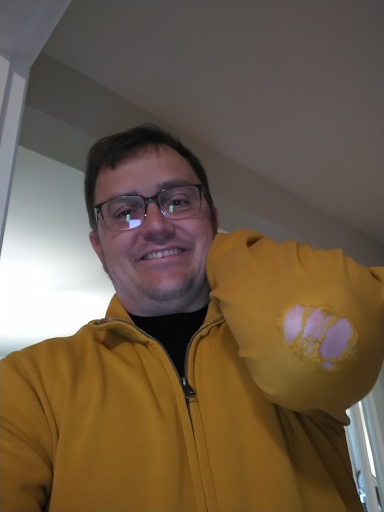 Everywhere I've done DevOps, and for every job I've interviewed for in the field, there is an overwhelming bend toward doing all work via CI/CD pipelines with scripting. This is by design, and it represents most of what people think of when it comes to "DevOps". If you were to apply for a DevOps job and talk about using a web site or some sort of client app to manage your infrastructure, I don't think you'd ever get beyond the first meeting.
Take, for instance, Azure deployments.  You can certainly use the Azure portal to do just about everything. Microsoft publishes loads of documentation on how to deploy, manage, and monitor your systems with the portal. They also provide similar docs for the Azure CLI and Azure PowerShell, giving folks the basics of what they need to do to script out the work.
Similarly, one of the main technologies that DevOps practitioners swear by is Kubernetes (k8s). I cannot envision a standard IT shop going down the k8s path without having some DevOps Engineer preaching it to them, as it's not a simple system at all. Everything configured with text files. Everything managed via command line with "kubectl". Requirements for all types of open source apps to monitor it. It is just hard.
Where I struggle, though, is that management of your k8s system is STILL being taught to just be run by some tech from his/her laptop. There are all kinds of features that allow you to do blue/green or canary deployments. You can gently scale up or down your pods to accommodate heavy traffic times. You can configure all kinds of traffic shaping to route to different versions of the same application running under different pods. Very slick stuff!
But ALL of that stuff is taught to engineers using kubectl! That, my friends, is no different than using any other management utility on your local machine to take care of your systems. Sure, you can script out the commands and run them via some pipeline, but that removes so much of the flexibility of using kubectl locally that I do not believe it's really viable.
In other words, don't believe all of the automation hype around k8s. If you want k8s, have at it, but for the love of God, don't tie your engineers' hands by making them use some pipeline to manage everything. Accept that they need to use kubectl locally so they can actually do their jobs effectively.
at March 13, 2021 No comments:

Just when we're almost finished fixing up the laundry room, Jenny and I have started working on our kitchen.  It's been needed since the day we moved in here.  Old dark brown walnut cabinets, hung too low, in a relatively small space.  Makes it feel like you're in a tiny little room.

We took down the cabinets over the peninsula already and that has made a world of difference. We had a 7 foot pantry cabinet that we've removed, too. Now we're staring at the real work.

Found some great wood cabinets on Facebook Marketplace and picked them up about a month ago.  I have an entire kitchen plus worth of cabinetry in my garage right now. All that's left is to rip out the flooring and really start putting back.

Hope to get this started next week and finished by the end of summer. "Hope" being the key word.

Over at LinkedIn, I'm doing a little series on basic probability and how Service Level Agreements work.  Seems to me that a lot of architects and engineers understand what an SLA is and what it means.  When they see multiple services with different SLAs, though, they always clam up when asked what the overall SLA is for their whole solution.  I don't know if they don't know how to calculate it or if they are scared to admit it.  Either way, the link below will take you to the series I started today.
I did a video to talk about basic probability.  I was going to just write it up as an article there, but couldn't really figure out how to say it.  So I just ran my mouth and recorded it. :)
Hope someone gets some value out of it. If not, at least I'm recording it so I can point people to it when they don't know how to figure it out.
LinkedIn Series, Part 1
at March 08, 2021 No comments:

I haven't blogged in a couple years, but I'm going to try to start back at it.  The old blog site was fine and all, but I was using Github Pages and doing all of it in Markdown.   That was "neat", I guess, but I'm switching to a Blogger site because it's:

1. Included with my Google Domain.

2. Just easier to use. No real need to nerd up posting random things online.

Here's a link to the old site.  I'm not going to bother moving stuff here, just leave it there.

It's no secret that I like to cook. I'm also pretty good at it, for a DIY home chef. My wife is even better and can not only cook, b...